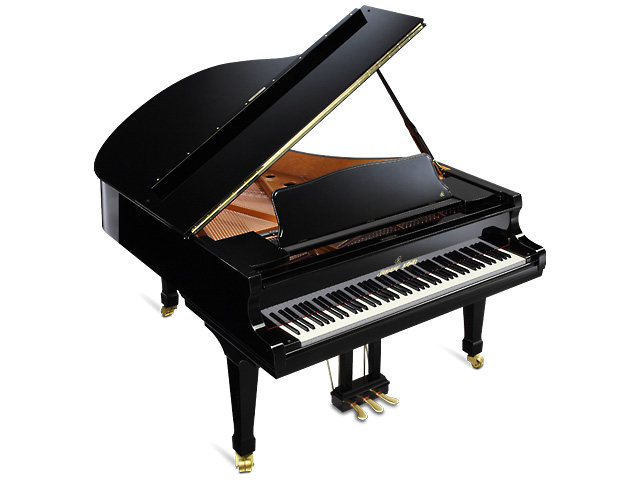 The SK-2 offers the elegant profile of a classic grand with a richness of tone unmatched by other pianos in its class.

As the war ended, Shigeru was disbanded from the troop and soon after he returned home, he was adopted by the Kawai family. At first, Shigeru was just an ordinary worker. He stood in the manufacturing area all day, sometimes slept overnight in the factory. He even bathed with his co-workers, using a drum can as a bathtub. It was an indication of how focused he was on his work, and how much he loved it. Three years later, he would start to learn piano design from his adoptive father, Koichi Kawai, the founder of Kawai. An engineer who was called “Hatsumei Koichi (Koichi the Inventor),” Koichi was the first person in Japan to design and build a complete piano action. He taught Shigeru how to build pianos from scratch. “Pianos are made of wood, so they must be made by hand that is appropriate to the characteristics of each material.” “As long as you are building pianos, you should strive to build the finest ones in the world.” Shigeru paid great attention to Koichi’s every word, but suddenly his adoptive father passed away. Filled with anxiety and despair, Shigeru took over the company. Over the next 35 years, Shigeru pushed himself to develop the company, transforming Kawai in to an industry leader, representative of Japanese quality. When asked about his career, Shigeru would often remark, “Creating pianos is the greatest job I have ever had !” Shigeru Kawai was that kind of a man.

The Millennium III Action features components made of ABS-Carbon, a composite material created by the infusion of carbon fiber into our renowned ABS Styran. ABS-Carbon is incredibly sturdy and rigid, which allows the creation of action parts that are lighter without sacrificing strength. The result is a stronger, faster action that offers more power, better control and greater stability than conventional all-wood actions.

Extended Length Keys Made by Spruce

Spruce is the ideal material for the keys – light, yet extremely strong for its weight. It responds with minimal flex and exceptional consistency, transmitting every subtle nuance of the pianist’s performance while remaining stable through years of heavy use. The length of each key has been extended to make playing easier and provide more even response from the front to the back of the playing surface. Keysticks are also designed with a slightly taller profile for maximum rigidity to deliver greater power.

Shiko Seion hammers, which take their name from the Japanese words for “ultimate voicing”, are the exclusive province of our Master Piano Artisans who oversee their formation from beginning to end.

Every hammer is meticulously hand-pressed without the application of heat and carefully voiced without artificial hardeners to ensure outstanding dynamic response and expression.

The process of winding copper wire around the bass strings requires highly-refined skills. In this process, KAWAI’s skilled craftsmen wind each wire carefully and precisely by hand to ensure the highest possible quality.

Identical to those used on our renowned EX Concert Grand Piano, Shigeru Kawai Concert Agraffes are individually machined from billet brass rods to assure maximum precision and strength. The result is clear, powerful and impressive tone.

The custom-tapered soundboard in a Shigeru piano is made exclusively from the finest spruce, aged by the traditional kigarashi process that uses only the forces of time and nature to allow the wood to attain a state of natural balance. It is this lengthy and painstaking process that gives Shigeru pianos their uniquely rich tonal quality.

Stretcher Over-Lap Integrated Design (SOLID) creates an exceptionally rigid foundation to support string tension. With SOLID construction, the pinblock is hand-fitted to the plate. The pinblock and over-lapping stretcher bar are then integrated into a single structure and solidly anchored to the rim. The resulting framework possesses outstanding strength and rigidity to ensure stable tuning and powerful tone.

The exclusive Konsei Katagi rim uses a blend of distinctive hardwoods to achieve an ideal balance of tone. For the inner rim, small-pored hardwoods that provide superior brightness and projection are interlaminated with dense, large-pored hardwoods offering warmth and fullness. This synergy of structurally divergent hardwoods produces a powerful, well-rounded richness of tone that is the hallmark of the Shigeru piano.

Spruce is known for its outstanding ability to conduct and conserve sound energy. However, it is generally considered too precious for use as a structural material. For the Shigeru pianos, all of the underside beams are made entirely of the highest quality spruce.

Meticulous attention to the needs of professional performers is evident in every feature of the Shigeru piano. One example, originally developed for our Shigeru Kawai EX Concert Piano, is the unique dual-pivot damper design that allows smoother half-pedal control for delicate tonal expression.

Kawai’s most esteemed sound creators are proudly known as Master Piano Artisans (MPA). They are the only individuals who can send Shigeru Kawai pianos out into the world. The title of MPA is a special qualification, bestowed upon the finest piano technician-those who possess skill, dedecation, and a passion for music.

Specifications are subject to change without notice.