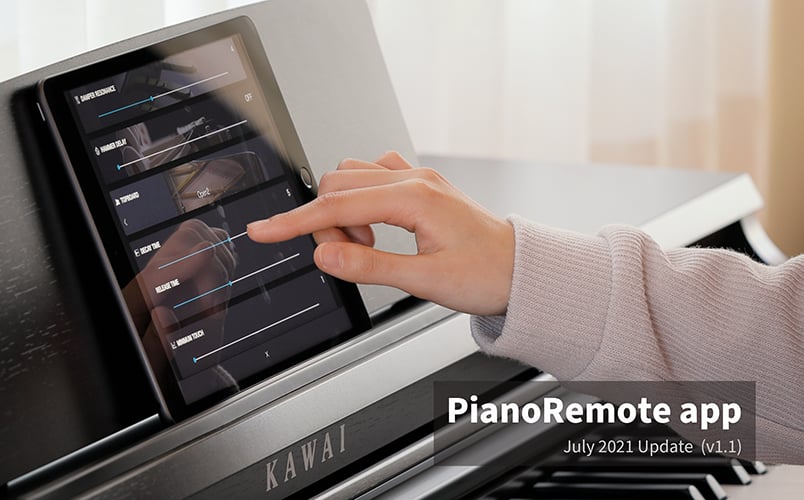 Kawai Japan has released an updated version of the PianoRemote digital piano control app for iOS and Android devices.

This v1.1 app update introduces a new Recorder function, allowing performances to be captured as MIDI or audio data.  In the case of MIDI recordings, the Lesson screen allows the tempo of recordings to be adjusted, or for part of a song to be repeated continuously in order to aid practice.  For audio recordings, the performance is captured using the smart device's built-in microphone, however higher quality recordings can be created using an external audio interface or microphone (sold separately).

Once a performance has been recorded, it can easily be shared with students, teachers, friends and family via chat/messaging apps, uploaded to the cloud in order to create a piano practice/progress log, or opened in other music apps for further editing etc.

Finally, the updated PianoRemote also includes a built-in owner's manual, providing a convenient way to reference and learn about the app's various functions and features.

The full PianoRemote app changelog is shown below:

1.0.1 (April 2020)
- Fixed issue that caused English text to display incorrectly on some screens.
- Fixed issue that allowed songs/pieces to be played in both the app and the piano itself simultaneously (excluding Demo Mode).
- Various other minor improvements and bug fixes.

PianoRemote is compatible with all Kawai digital/hybrid pianos released since 2020.  For more information about the app, please refer PianoRemote product page of the Kawai Global website accessible via the following URL: