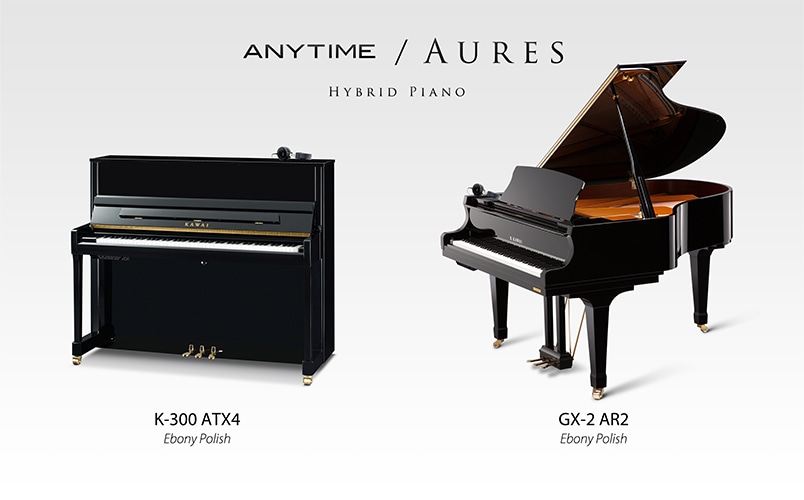 Kawai Japan is delighted to announce the AnyTime ATX4 and AURES AR2, the latest additions to Kawai’s growing line of class-leading hybrid pianos. AnyTime ATX4 and AURES AR2 instruments combine the superb craftsmanship and exceptional performance of Kawai’s renowned upright and grand pianos with the cutting-edge sound technology and inspiring features of the latest Concert Artist digital pianos. This harmonious blend allows pianists to experience the pleasure of playing an acoustic piano, while enjoying the modern convenience and many benefits of a digital instrument.

This unique design allowing pianists to play AnyTime ATX4 and AURES AR2 grand piano instruments with the same level of effortless fluency as their standard acoustic counterparts, while enjoying digital features such as the ability to practice in silence with headphones, select a variety of different sounds, or even perform concertos with an orchestral backing track.

In addition to the acoustic muting and digital features of the AnyTime ATX4 pianos, AURES AR2 instruments are also equipped with the latest iteration of Kawai’s advanced Soundboard Speaker System. This innovative technology utilises four high-performance transducers which are strategically placed onto the upright or grand piano's solid spruce soundboard. These transducers channel the AURES AR2 instrument's digitally generated sound through the large wooden soundboard, resulting in a naturally acoustic tone that is more expansive than that produced by traditional cone speakers.

Pianists can then enjoy the flexibility and convenience offered by a digital piano, such as the ability to select a broad range of different instrument sounds, record and playback one’s performance, or freely adjust the volume level to avoid disturbing loves ones – all while continuing to play the AURES' exceptional Millennium III upright or grand piano keyboard action.

Designed to meet the connectivity needs of modern pianists, AnyTime ATX4 and AURES AR2 pianos feature standard USB and MIDI jacks for connecting to computers or other instruments, as well as integrated Bluetooth® MIDI and Audio technology that allows wireless communication with supported smart devices. Once paired to a phone, tablet, or laptop, AnyTime ATX4 and AURES AR2 owners can enjoy a wide variety of exciting music-related apps that enhance their studying and playing experiences, or stream high quality, low-latency aptX audio directly through the instruments’ headphones or the AURES AR2’s Soundboard Speaker System without the need for any cables.

The digital features of AnyTime ATX4 and AURES AR2 pianos are exclusively controlled via the dedicated Kawai PianoRemote app, available for both iOS and Android devices. PianoRemote provides a range of functions, including sound selection and customisation via the Virtual Technician feature, performance record and playback with integrated metronome, and a built-in piano music library consisting of hundreds of classical pieces to enjoy – all accessible from an attractive, intuitive user interface.

To ensure that AnyTime ATX4 and AURES AR2 instruments match the premium quality and excellent playability of their standard acoustic upright and grand piano counterparts, Kawai’s R&D engineering staff worked closely with the company’s internal Master Piano Artisans (MPAs). These extremely knowledgeable and experienced technicians supervised each stage of the ATX4/AR2 development process, to ensure that the instruments’ acoustic keyboard action remains exceptionally responsive and balanced, even when used to trigger the digital piano sound engine, and guarantee that the tonal characteristics and performance of the AURES AR2 Soundboard Speaker System are as close as possible to that of an acoustic piano.

For over nine decades, Kawai has earned a reputation for outstanding quality, workmanship and innovation in the crafting of world-class instruments. Kawai acoustic and digital pianos are a top choice of pianists, teachers, students, and professional musicians around the globe. The skillful blending of traditional piano craftsmanship with state-of-the-art technology has made Kawai one of the most award-winning companies in the entire music products industry – having received over 50 major international awards for excellence.

For more information about the AnyTime ATX4 and AURES AR2 series of hybrid pianos, please refer to the product pages below: